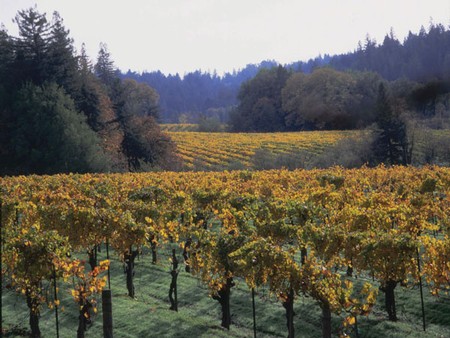 The Russian River Valley is located in the heart of Sonoma County, CA. With over 15,000 acres planted to grapevines, there is a broad range of wines from the Russian River Valley. Cool-climate-loving varietals thrive here, and Chardonnays and Pinot Noirs in particular are renowned around the world. But other grapes that you may not expect also express themselves beautifully in our cooler region, providing unexpectedly bright and rich wines.

The Russian River Valley climate is sculpted by the regular intrusion of cooling fog from the Pacific Ocean a few miles to the west. Much like the tide, it ebbs and flows through the Petaluma Wind Gap and the channel cut by the Russian River. The fog usually arrives in the evening, often dropping the temperature 35 to 40 degrees from its daytime high. The fog retreats to the ocean the following morning. This natural air-conditioning allows the grapes to develop full flavor maturity over an extended growing season — often 15 to 20 percent longer than neighboring areas — while retaining their life-giving natural acidity.

The geologic history of the Russian River Valley is both active and recent. The collision between the North American and Pacific tectonic plates caused the uplift of ancient bedrock, which then eroded. Within the last few million years, the eruption of volcanic vents immediately to the east resulted in the deposition of volcanic ash on the shallow ocean bottom. The resulting sandstone gave us our famous Goldridge loam soil. Water flowing off of the Sonoma Mountain range carried with it eroded volcanic material, creating soils with large amounts of clay in the central portion of the appellation. Then, in what remains a major mystery to geologists, the Russian River, which once flowed south to what is now San Francisco Bay, changed course and headed west through the coastal foothills. Along its course it deposited large amounts of alluvial materials that are now river bench lands. Each of these different soils has a profound effect on wine produced from grapes grown in this soil.